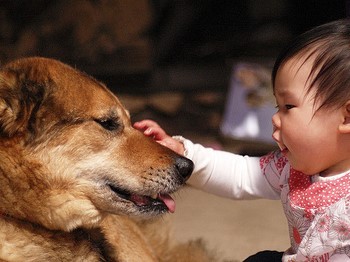 I just came across an article by Agata Blaszczak-Boxe on Live Science about how having a family dog may lower a child’s asthma risk, based on a new study.  (That is, if you don’t already have a child with the existing condition.)

I know there’s been mixed conclusions on this topic.  I paid attention to this study because of how thorough the research appears to be.  The study was conducted over a period of about 6 years, on close to a million children in Sweden.

Children who are raised in households with dogs or farm animals during their first year of life may have a lower risk of asthma a few years later, a new study suggests.

In the study, the researchers looked at early exposure to dogs and farm animals and the rate of asthma among about 377,000 preschool-age and 276,000 school-age children in Sweden.

In the study, the researchers looked at diagnoses of asthma obtained from the National Patient Register in Sweden. They also examined data on prescribed asthma drugs dispensed at pharmacies in Sweden. The researchers also looked at whether the kids’ parents were registered as dog owners during the child’s entire first year of life, and whether the parents reported that they worked with farm animals. The data in the study were analyzed from January 2007, through September 2012.

Currently, one of the main hypotheses that aim to explain the link between a lower risk of asthma and early exposure to pets is that “kids in animal environments breathe air that contains more bacteria and bacterial fragments, which actually could lower their risk of asthma,” she said.