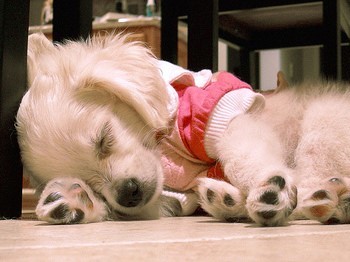 I just learned a whole lot about the first few weeks of a puppy’s life from an article by Lynette Arceneaux in The Nest.  She wrote about what to expect and how to care for the pup at each stage of growth from newborn to 12 or 16 weeks.

The newborn pup is unable to see, hear, walk, or even keep his body temperature the first 2 weeks.  That’s what moms are for–food and warmth.

But he DOES have the sense of smell and touch, so he can find mom.

During these first two weeks, the puppy spend about 90% of his time sleeping, and 10% of his time eating.  He twitches and kicks and whimpers when he sleeps during this period because that’s the only form of exercise he gets.

Here’s an excerpt from Lynette’s article:

…week two. The puppy’s eyes usually will open during this week, followed by his ears. Many experts recommend that the breeder pet and handle the puppy for at least three to five minutes every day at this point. A puppy that receives gentle human handling tends to have improved cardiovascular performance and disease resistance. He also matures faster, develops better problem-solving skills and is better able to tolerate stress as an adult, according to The Merck Veterinary Manual.

That’s what I heard about human babies too–the touching, that is.

Socialization Period: The Ways of the World

The socialization period lasts from three weeks to as late as 16 weeks, and it is the period many experts feel is the most important time in a dog’s life. During this time, the puppy learns what is expected of him, and what rules and behaviors he must follow to be accepted in society. In the puppy’s case, however, he must learn the ways of two societies, canine and human. His mother and littermates are teaching him acceptable canine social behavior, and the conscientious breeder is teaching him acceptable behavior among people. He should be kept in a busy area of the house, growing comfortable with the sights, sounds and smells of a typical household. The puppy will want to explore his environment, but he also has the ability now to learn boundaries and simple behavioral responses.