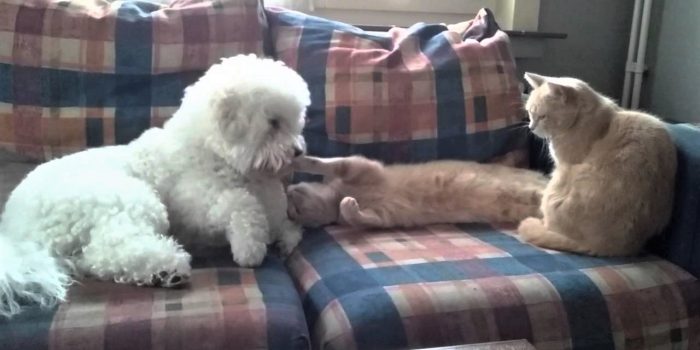 The Bichon Frise in this video is making friends with cats.  The one right next to him is quite fond of the Bichon.  In fact, toward the end of the video, the cat starts grooming her Bichon friend.  This friendly one keeps the affection going by almost acting like a cat in the way he mirrors the cat.  At several points, the Bichon sneezes.  Could he be allergic to cats?  Or is that one of those playful sneeze or snort?

This Bichon is quite characteristic of his breed–sweet and affectionate, according to Vetstreet.  Still, it is a good idea to match a Bichon with children who already know how to handle dogs respectfully, especially if it’s a smaller Bichon.  If a young child handles them too roughly, they can snap because they are frightened.  It’s a good idea to train a Bichon in the area of nipping, snapping, and barking.  Be consistent in your training.  And be gentle.

Characteristics of a Bichon

Bichon is someone who will let you know when the neighbor is coming home, leaving home, when the mail is here, when anything unusual is going on.  This makes him a good watch dog.  However, it can be annoying to neighbors.  So train him early which situation warrants barking.

Bichons are known for their “Bichon Blitz.”  For no reason, they would use the house as a racetrack, bouncing off furniture, maybe barking while they are running.  It’s a sudden burst of energy.  It could last 15 seconds; it could last several minutes.  And then they just lie down to recharge themselves.  It is very amusing to watch.  Perhaps it’s their form of working out.

And do walk them for 15 minutes everyday.  And longer if he has no other dog to play with so he gets his daily exercise.  You can read more about Bichon Frise’s temperament here.  Enjoy watching this sweet Bichon making friends with the family cats.  At least one of the cats really adores him.  It’s so nice that he has no preconception about cats.