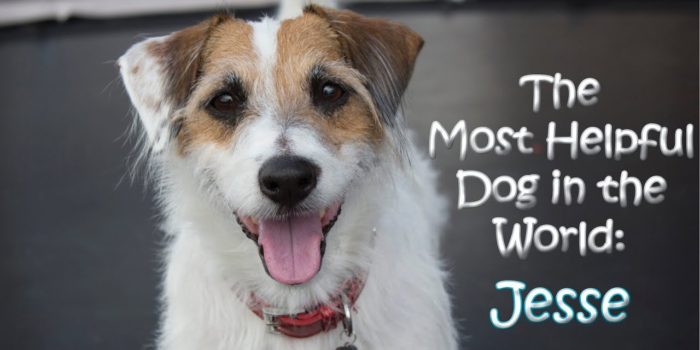 Just imagine how much free time we would have if Jesse were OUR dog!  In this video, we see some impressive skills of Jesse, the most helpful Jack Russell Terrier.  He is not just a personal assistant, but also a housekeeper.  The skills he’s learned probably are learned by dogs who serve individuals with a variety of needs.   Getting the mail, pushing the button to open a door, bringing a towel to dry up a wet spot on the floor, pulling the bedsheet up on laundry day.  These are real skills that a service dog could use to help someone.   In an interview with Small Animal Talk, Jesse’s owner, Heather, shares her meeting with Jesse and her relationship with him.

The Story of Jesse the Jack Russell Terrier

She asked for a Jack Russell Terrier for her 16th birthday. Even at that tender age, Heather was aware of the responsibilities of caring for a puppy.  She saved her allowances to pay for all of Jesse’s care–vet’s bill, food, toys.   She met Jesse when he was 3 weeks old, when his eyes and ears just opened.  She visited him every week until he was 8-weeks-old, when she could bring him home. The 2 have been inseparable since.

Jesse taught himself to sit up when he was just 9 weeks old.  When they start working on basic tricks like shake, roll over, play dead, Jesse picks up the skill really quickly, and always with a happy heart.  So they advanced to more challenging skills. Some of the tricks Jesse knows, he thinks of them all by himself.   Heather only uses positive reinforcement with Jesse.   He has been in several movies, television talk shows, and commercials.  You can read the entire interview here.  Enjoy watching Jesse the multi-talented Jack Russell Terrier help around the house in this video.