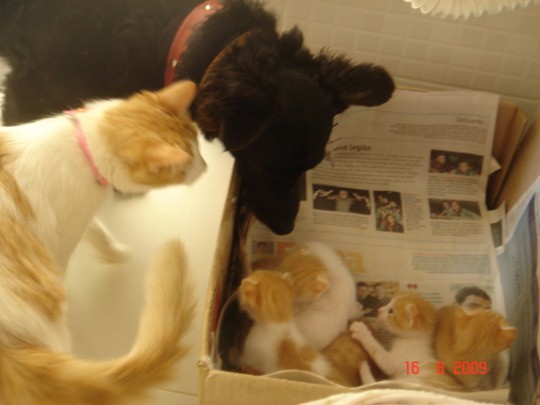 I just love this beautiful story of a dog who took care of a pregnant cat.  I found this story on Tumblr by Time Dragon Clock.

This beautiful dog is Shaun.  He was adopted by a loving family when he was abandoned.  Shaun is very good about finishing his food in his bowl.

Then one day he started leaving some food in his bowl.  And in the morning the food is gone.  (But Shaun sleeps beside his human family all night, so he wasn’t the one who emptied the bowl.)

So someone played detective after dark, and waited quietly near the food bowl.  In the night, a cat came through the window and ate the food that Shaun left.  The cat was pregnant.

About a week later, the cat came to the house to give birth to 6 kittens.  Shaun took care of the kittens as if they were his own.

By the way, the family adopted the cat (named Meow) and the kittens have all found loving homes.

CLICK here to read the entire story and see one more photo.