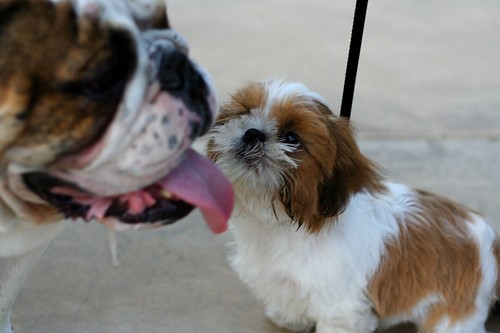 I just read an article by Susan Paretts on the Nest on how to introduce a new puppy to your family dog.  She offers some really good suggestions on how to make this a smoother transition.

She suggests the first meeting to take place outside your home, in neutral territory (for your family dog).  Maybe at a park, a friend’s backyard.  Have both dogs on leash, and ask your friend to hold the leash for the pup, while you hold the leash of your family dog.  Just walk side by side, and let the two sniff each other and get acquainted at their own pace.

The overall guideline is to reinforce the positive with praises and treats.  Respect the space and needs of the family dog.  Gradually increase the time that the two dogs spend together.  And if you are not home, keep the new pup in a separate room or in a crate until the family dog is completely adjusted to having the little one around.

Here’s an excerpt from Susan’s article:

Puppies are little balls of energy that love to jump, run and play. Unfortunately, an adult dog, especially an older one, won’t have the energy or patience to keep up with such behaviors. Prior to their first meeting, allow your new pup to run around for a few minutes and tire him out with a game of fetch. This will keep him more calm and less apt to bother your existing pooch during their first meeting, according to Cesar’s Way.

Allow your two canines to meet in a location outside of your home, such as a local park or even in a friend’s backyard. Your existing pooch considers your home part of his territory, so you want to meet outside the home in an area that is neutral to both dogs. Put both pups on a leash and have a friend handle the new pup while you handle your existing dog. Don’t force the pooches to interact but simply walk them alongside one another, allowing them to sniff each other for a few minutes. Keep the tone of the meeting upbeat and reward each pooch for good behavior with treats and praise.