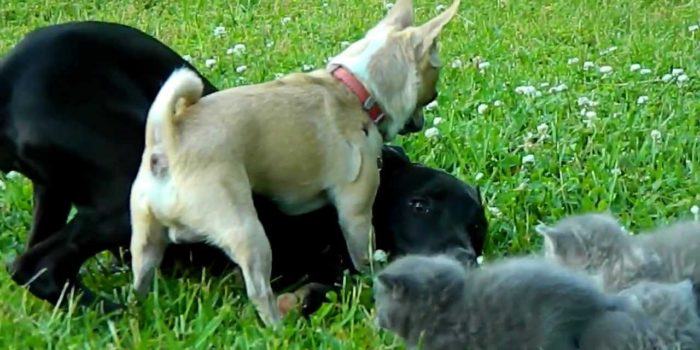 The big dog in this video is Roxy, who is curious about these tiny kittens, and is probably figuring out how to play with them.  But Charlie, the chihuahua, does not like the way Roxy is going about it.   He has taken it upon himself to protect the kittens from the nosy Roxy.  Charlie growls at Roxy, and stands between her and the kittens.  When Roxy wouldn’t give up, Charlie chases after her and stands over her.  Yes, a little dog standing over a large dog, with the large dog acting submissive.  These kittens are very lucky to have Charlie as their guardian angel, even though Roxy doesn’t look like she was up to any mischief.  Typical of a Chihuahua, Charlie is protective of his entire family.  They know no fear when they are in protection mode, as you can see in Charlie’s behavior toward Roxy, according to Pet Chi Dog.

Chihuahuas can be very attached to one person in the family, if that’s the one who spends the most time feeding, grooming, and caring for them.  However, with some Chihuahuas, if all members of the family are just as involved in the caring, the feeding, the exercising, the playing, the training, Chihuahuas can become attached to all of them.  In general, they can get along with cats and other dogs, even larger dogs.  But they are particularly fond of other Chihuahuas.  In fact, if you have more than one Chihuahua in your home, there is a good change they’ll follow each other around.   This is a watch dog.  If someone rings the door bell, the Chihuahua is going to bark even if it’s usually a quiet dog.  And if it senses danger for its family, it’s going to bark powerfully, as if it’s a big dog.  You can read the entire article here