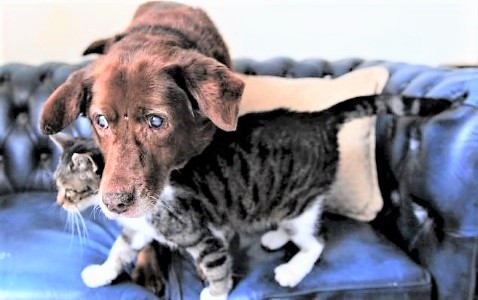 This video is a heart warming story of a guide cat and her blind dog friend.  It’s very sweet to watch one animal helping another.   Terfel is an 8-year-old labrador Retriever who’s been diagnosed with cataracts.  As his cataracts got worse, the once active Terfel became hesitant and preferred to stay in his sleeping basket than to go outside to his once familiar world.  Dog Time shares that his owner, Judy Godfrey-Brown of Holyhead, North Wales, took in a stray cat one day.   To her delightful surprise, the cat immediately sensed Terfel’s condition.  Terfel hadn’t left his safe nest for months by this time, but as soon as he met the cat, he liked her, and allow her to gently guide him through the garden.   The two became best friends right away.  They take lots of walks around the garden, and they snuggle together when they are inside the house

Judy is very grateful to this cat for her healing presence, and adopted her permanently.  She named the cat Pwditat, pronounced “Puddy-Tat”, what Tweety Bird calls Sylvester the cat in Looney Tunes.  Pwditat guides Terfel with her paws.  And in this video, you can see that she uses her entire body to step in front of Terfel when he is stepping too close to the edge of the sofa.  She is basically acting as his body guard.   Judy says that they are practically inseparable, and they also sleep together.  Judy’s friend, Anne Craig, helps to care for Terfel and Pwditat when Judy was ill and had to stay in the hospital.  She could tell right away the special friendship between these two.  She can see that the two really love each other.  Thank you, Pwditat!  You are an amazing healer!  You can read the entire article here.