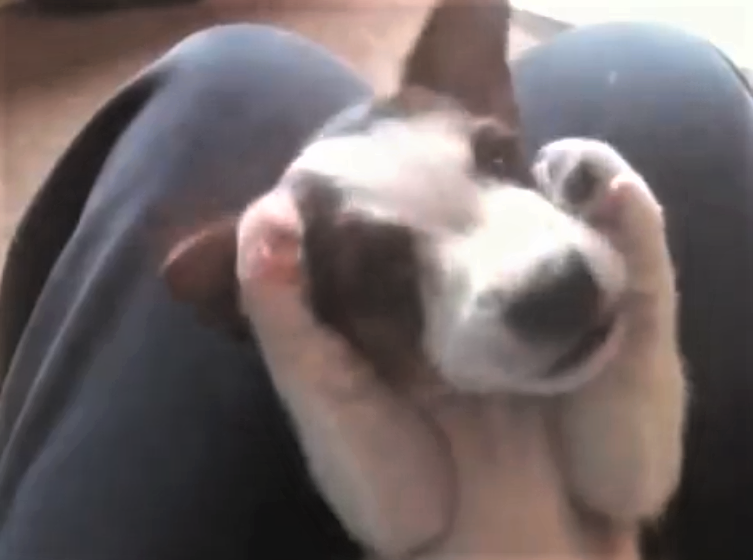 This video shows a most adorable 2-months-old Jack Russell brushing his face with his paws.  Imagine getting to watch this adorable act everyday.  This puppy knows he’s adored.  He’s sweet, and he’s rambunctious.  After the owner plays with the pup upclose, the pup gets to go on the floor and be his rambunctious self.

Listen to that loud bark coming from a 2-months-old.  This is going to be a talkative one.   According to Amy Brannan in Canine Journal, Jack Russell has earned the reputation of being a small dog with a big attitude.  Even though their origin is in fox hunting, Jack Russell found a soft spot in dog lovers.

What are the characteristics of a Jack Russell?

This is a high energy dog.  Their original hunting instinct means they have lots of stamina, even more than that of a large dog.  As a household dog, this means they need lots of avenue to let off their energy.  Lots of exercise.  So take this into consideration if you are thinking about getting a Jack Russell Terrier.  Their life span is about 15 years.

Amy also writes that because of their origin as hunting dogs, there could be a tendency to bark in order to communicate with the owner about his job.  Jack Russell terriers are very intelligent.  Very trainable.  So if you provide the training for this dog, you can have a very well-behaved dog.

They are also good for children, provided that they treat him with respect.  They don’t tolerate being pulled on, like a Labrador might.  So if you do have young children, make sure you teach them how to approach and respect dogs when playing with them.  You can read more about Jack Russell here.  Enjoy watching this very adorable Jack Russell puppy brushing his face with his paws.