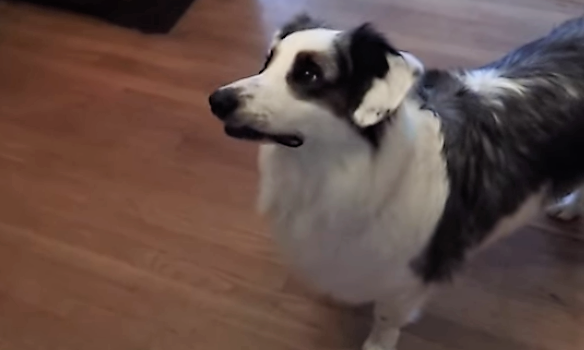 What a talented dog!  In this video, Cheerio the Australian Shepherd quickly retrieves all his toys.  His human, Laura, picks out several toys and shows Cheerio which ones they were.  Then she told Cheerio to stay in one room while she goes all over the house and hides the toys.  When she’s done, she says to Cheerio, “Toys, find”

One by one, Cheerio finds the toys (and it didn’t take him all that long).  His human outlines how she taught Cheerio to play this game.

Laurie noticed that if she leaves Cheerio’s out, he would quickly destroys them.  Or, he would keep getting his humans to play with him.  So Laurie starts hiding his toy one by one and have Cheerio look for them.

At first, Cheerio was mostly using his sight to find the toys, not so much sniffing.  Then Laurie made it harder by rubbing the toy on different things.  But Cheerio is so good at it that this trick did not fool him at all.  Then Laurie hides the toys in more challenging places.

In this video, she puts it under a blanket that the cat is lying on.  She finds that if she uses squeaky toys, she will know when Cheerio finds it.  When one toy at a time becomes too easy for Cheerio, Laurie starts hiding more and more toys at one time.  This is now Cheerio’s favorite game.

Since Australian Shepherds are very intelligent, it is a very good idea to give them both physical and mental exercise.  They like having a job.  This Hide and Seek game is a perfect combination of utilizing their sniffers, their mind, and their body.  You can read the details of Laura’s journey with Cheerio as she progresses from one toy to 6 toys in this article.