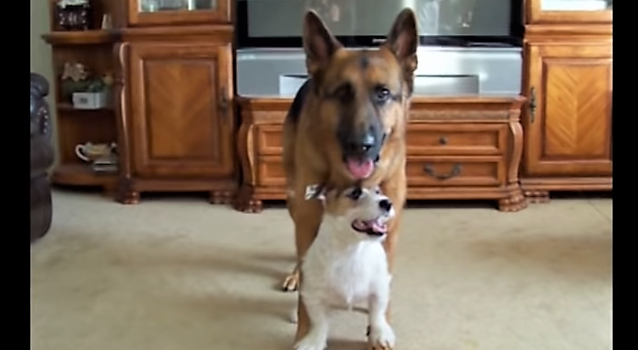 In this video, Jesse and Kaine practice weaving around their Mom’s legs, wrapping their paws around a cane, putting their front paws on top of their Mom’s feet and walk.  They leap from one bed to another.  (This is part of their tricks, they weren’t just messing up the beds. 🙂 ) Kaine and Jesse walk backward in circle around their moms.  Kaine is very sweet to let Jesse jump over him again and again, and circle around him.  You can see his ears showing a bit of discomfort.  But he is so well trained that this is acceptable to him.

Jesse the Jack Russell doing tricks with a German Shepherd

The two do the moon walk together.  Kaine would pick up a plastic lid and drops it into the recycling area; Jesse would close the cabinet door for him.  They pull off their moms’ socks.  Jesse would jump rope, with Kaine holding one end of the rope in his mouth.

Jesse would scoot under Kaine and put his front paws on top of Kaine’s front paws.  Kaine would pick up the leash and walks Jesse.  Then they do the laundry, with Kaine picking up dirty socks and putting them in the basket.  Jesse then pulls the rope tied to the basket and pulls it to the laundry room.  Kaine picks up the laundry and puts it into the washer.  Jesse closes the door of the washer.  And the most endearing of all, they put their paw on the back of their friend.  This is indeed a very special friendship.  The bonds often happen between the trainer and the dog.  In this case, with the two friends training together and growing up together, it’s as if Jesse has his very own brother.

Enjoy watching Jesse and Kaine during tricks together.   If you enjoy this video, here is another one of Jesse the Jack Russell being helpful.