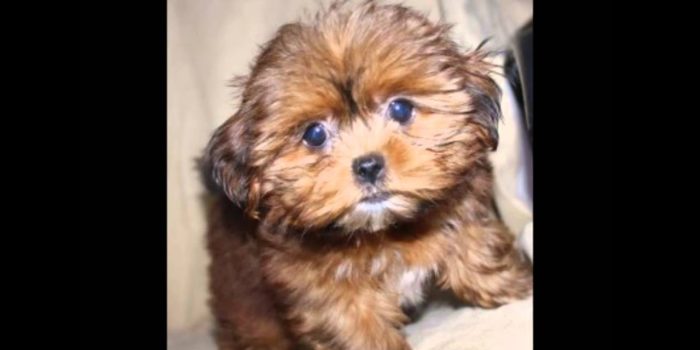 This video shows the growing phase of a Shorkie.  Sometimes also called Shorkie Tzu or Yorkie Tzu.  This pup just looks better and better every month.  Even through the puppy haircuts.  Shorkie Tzu is a cross between a Shih Tzu and a Yorkshire Terrier.

Because both parents have silky hair, so does the Shorkie.  Small Dog Place  shares that they don’t shed, so it is a good option for those allergic to most dogs.  But still spend some time around Shorkies before bringing one home if this is the main reason.  Not shedding does not mean hypoallergenic.  The only way to know is to be around them and watch your body’s response.

What’s the personality of a Shorkie? (Shih Tzu and Yorkie)

Parents of the Shorkie share some personality traits.  They are both loving, affectionate, loyal, and playful.  Shih Tzu was bred for companionship for centuries.  Yorkies have been bred to hunt rats, but now they have become companion dogs. Still, there is that nature to become interested in small creatures.

The sporting aspect of the Yorkie is not as strong as other breeds that were bred for hunting sports.  It’s hard to predict which side of the family the Shorkie takes after.  Some would be more like one parent than the other, just like humans.  However, since both parents are gentle and prefer to be near their family.

They are very intelligent and you can train them.  They don’t need that much exercise, just like their parents.  Just following you around the house may be enough exercise for them.  But most of them would like to have a walk outside and have a short run. Sometimes they may get a burst of energy and suddenly run like crazy around the house, but just for a minute.  Shih Tzu aren’t yappy.  They bark to let you know someone’s at the door.  Yorkie are more talkative.  So the Shorkie can turn out either way.  You can read more about the Shorkie here.  If you enjoy this video, you might also enjoy another one of a Yorkie.