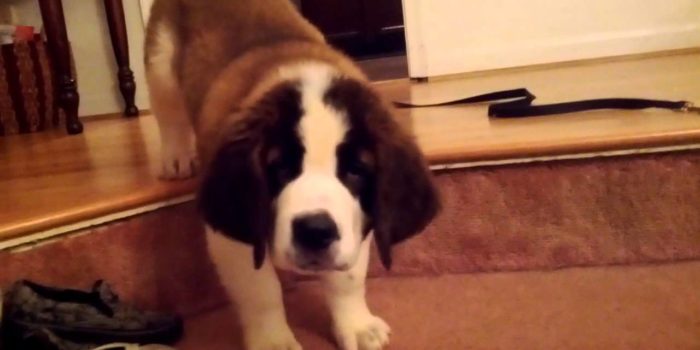 The St. Bernard puppy in this video is getting his first taste of stairs.  I think he does not care for the adventure.   Even though he succeeds going down the 1st and 2nd step, he wants to retreat back to the safety of the flat surface.   Encouragement isn’t quite enough to ease his anxiety.  His tail keeps wagging while he makes his attempts.  His legs are the same height as the step.  Putting ourselves in Watson’s shoes, would we go down a step that is the same height as our leg?  Many of us would hesitate to do that.  And if we do, probably back into it instead of head down, which is what we ask our dogs to do when we encourage them to come down the stairs.  There are easier ways to do this to build their confidence around height, and less stressful for them.

It’s easier to climb up the stairs than to climb down.   It’s less scary.  There’s not the whole staircase to potentially fall down.  If your puppy is hesitant to climb up the stairs, then do not force him.  Instead, use hard cover books that are broad enough for them to practice on.  And choose covers that are not slippery.  Encourage your puppy to step onto the 1 inch book, perhaps enticing him with a treat first.  When he does that repeatedly with confidence and ease, add one more book.  Repeat the encouragement until he is comfortable with 2 books.  Then keep adding more books.  Do this gradually.  If your puppy lets you know that he’s had enough for the day.  Stop and start again another time.  Increase the number of books until it’s about the same height as the step.  Then try the stairs again.  The woman in the video responds to Watson when he reaches for her head.  Actually that was what distracted Watson enough that he took the second step down.  Sometimes distraction from what’s fearful can also be successful.  Let them think they are aiming for something else other than the stairs.  And in the process, they get both the reward and master the stairs.