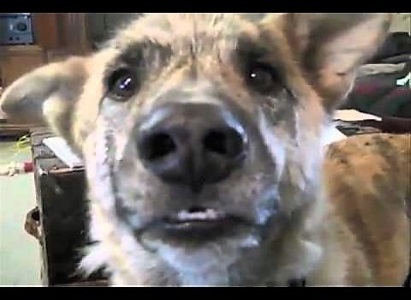 This is a video of Talking Dog having a conversation about wanting to win a Hero Dog Award.  Clark G. always puts a smile on our face.  Clark learns that the award if for a hero dog.  He says he wants an award.  Then he was told that even if he wasn’t nominated for the ward, people still love him.  Clark is so delighted to hear that, and was offered a treat.  Of course he opted for bacon.

This video was actually about the 2012 Hero Dog Award, which takes place every year.  It is sponsored by American Humane.  You can vote for the top dog in each category, and you can vote everyday until May 3rd.  The intention of the Hero Dog Award is to honor those on both ends of the leash.  8 finalists and their humans will fly to Hollywood for a star-studded awards gala.  It’s going to be broadcast on Hallmark Channel this Fall.  One dog will win the grand prize American Hero Dog title.

An award to honor courageous dogs

In an effort to cultivate future generations of hero dogs, American Humane donates $2,500 to each of the 8 finalists’ charity partners.  The American Hero Dog will receive an additional $5,000 for their charity partner.  This competition recognizes ordinary dogs who do extraordinary things.  Well, to us, this would be a description of our dog.  The intent of the competition is to honor those canine friends who save lives on the battlefield, being a companion to humans who can’t see or hear, as well as those who warmly welcome us home everyday.

Dogs can compete in 7 categories for the Hero Dog Award.  They are:  Law Enforcement/Arson Dogs, Therapy Dogs, Service Dogs, Military Dogs, Search and Rescue Dogs, Guide/Hearing Dogs, and Emerging Hero Dogs (referring to the ordinary dogs who do extraordinary things.)  You can read more about the guidelines here.  Even though Talking Dog Clark G. doesn’t qualify as a hero dog, to us–his fans–his ability to make us laugh everytime we watch his video makes him our comical hero!