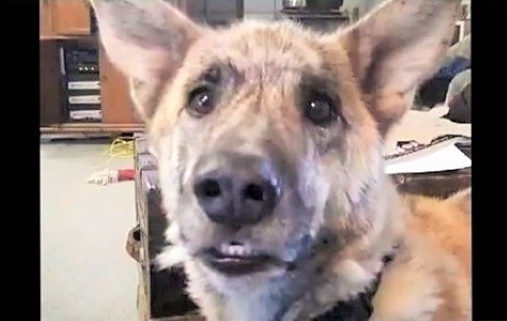 You might have watched videos of The Talking Dog.  In this video, the Talking Dog is super excited about getting a kitten.  The narrator builds up the excitement before he gets to the part about the kitten.  The Talking dog just can’t stand the suspense anymore, even threatens to “chew off the arm of the sofa” if he doesn’t stop teasing him.

The voice-over is absolutely wonderful, matching the facial and body expression, and the LIP movement of the dog.  A fabulous artist!  Talking Dog’s name is Clark G. the dog. He was adopted by Jennifer and Marc. They adopted him from the Colorado Puppy Rescue after losing one of their dogs, writes Paul Bradley Smith. Marc and Jennifer searched online for shelter dogs.

How Talking Dog met his family

The dog Clark’s parents had originally wanted to take home was adopted by someone else, that’s how they ended up going to the Puppy Rescue where Clark G. was.

At that time, Clark G.’s name was Puppy #55. One other family was interested in him. Clark’s parents had to wait for that family’s decision. After the Rescue center told the other family what is involved in caring for Clark G., they decided that this would not be the best match for their family because Clark did have some special needs.

And that is how Clark came to join Marc and Jennifer’s family. And that’s how he changed his name from Puppy #55 to Clark G.

The first night he was home, Jennifer noticed that he was scratching and crying all night. She experimented with different food for Clark, did a bunch of research and found the solution that stops Clark’s allergy. Now Clark G.’s diet is lamb and rice. Clark also learns that there is a hierarchical order at home. Layla was with the family longer, so she gets to climb in bed first with their parents. Enjoy listening to this conversation.