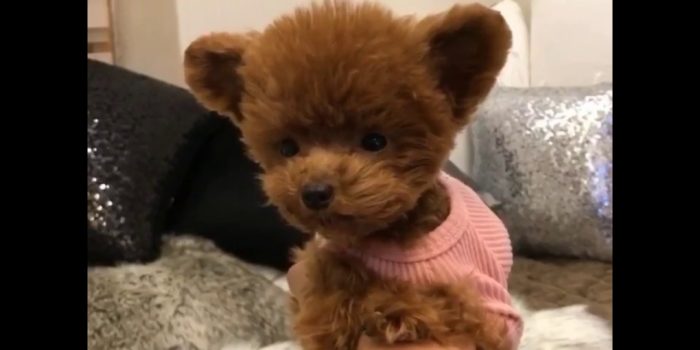 Isn’t that a photogenic dog?!  This is a video of Teddy Bear puppy Shu hanging out with her sisters.  Shu is a Toy Poodle who lives in Seoul, South Korea, with her doggie sisters.

Jessica Norton writes in Awesomeness TV that Shu’s oldest sister is a Maltese named Bibi, born in 2013.  The next oldest sister is Shasha, a cream colored Toy Poodle born in 2015.  Then a Chihuahua sister named Petit was adopted.  Ruru, a Toy Poodle, was born on Christmas Day, 2015.  Shu was born in February, 2016.  Younger sister, El, is a cream-colored Toy Poodle born a month after Shu.  Together, they are called “The Six Sisters Story.”  Completing the happy family is a cat brother, who is comfortable hanging out with 6 doggie sisters.

Characteristics of a Poodle

Poodles come in standard size miniature, and toy.  There is a slight difference in behavior if you have one of each to compare, according to Vetstreet.  Standard Poodles like to have a job to do.  They are a bit more reserved and calm than the miniature and toy.  They like to be active and are energetic.  A Miniature will follow you around.  Of the three, this is the most active one.

If you want a smaller Poodle for your young children, a Miniature is a better choice than a Toy because they are just too tiny to be around and handled by little children.

Toy Poodles wins the crown for being the companion dog.  Both the Miniature and Toy have a mischievous side to them that the Standard doesn’t.  Poodles like to be actively involved with the family.  They don’t like to be alone too often.

Poodles are known to be so intelligent that should they outsmart you, do not be surprised.  It’s not you, it’s them.  And if you get a Toy Poodle, consider training her into a therapy dog.  Teach her tricks so she can cheer people up in children’s hospitals and nursing homes.  They have an empathetic nature, and they are so good with people.  You can read more about Poodles here.