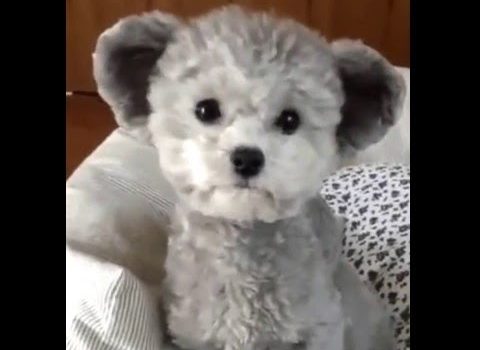 What a lovely face!   And those ears!    The puppy in this video looks more like a teddy bear than a dog.  But it IS a dog.  At the end of the video, watch how far back he pulls his ears.

Actually teddy bear dogs have only been around since the late 1990’s, according to Mini Teddy Bear Puppies. They started out being bred to be therapy dogs and for children with disabilities.  Well, for one thing, look at that face?!   Who wouldn’t go “aawwwww” when they see a face like this?  No one would be intimidated.  Plus they have a mild temperament.  That’s essential for being therapy dogs because lots of people will be petting them, both friends and strangers.

They do not often bark unless they sense danger.  So if you are looking for someone who talks back, this is not the dog.  Try a French Bulldog.  🙂

Teddy bear dogs are loyal.  They love physical contact, so they may take a nap on your lap or by your feet.  According to Mini Teddy Bear Puppies, the term “teddy bear” is not referring to a specific breed, but most commonly refers to a cross between Bichon Frise and Shih Tzu.   Since there are more hybrids now, the term can include Toy Poodle, Shih Tzu, Bichon Frise, Yorkies, among others.

They are usually between 11 to 16 pounds when full grown, but can weigh as much as 20 pounds. They might be easier on dog lovers who have allergies.  Still, if you do have allergies and are getting this dog for that reason, it’s a good idea to spend some time around them to make sure you are not allergic to them before you decide to bring one home.  You can read more about teddy bear dogs here.  Enjoy watching this teddy bear dog wiggle his ears at the end of the video.