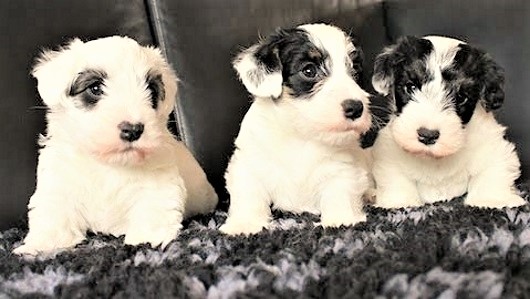 The 6-weeks-old Sealyham Terriers in this video are joyfully playing in the garden.  Seldom do we see Sealyham Terriers.  We see their cousins the Westies and the Scottish more often.  There is a reason for this.  In the U.S., only 75 new Sealyham Terriers are registered each year, vs. 60,000 new Golden Retriever puppies, according to Michele Welton in Your Pure Bred Puppy.

Personality-wise, the Sealyham Terriers are more calm and relaxed than most terriers.   But they are more independent and strong-willed.  It’s good to train them from the time they are puppies, given this temperament.  And use only praise and food when training them.

They don’t like to be teased, and no dog should tolerate being teased.  It is a good idea not to match terriers with families who have young children, who may accidentally step on a puppy’s paw, or pull the puppy’s ears too hard.

Michelle writes that Sealyham Terriers are possessive of their food and toys.  This is another reason not to match them with children, who just might want to pick up their toy to play with their beloved doggie.  It is good to take care of this possessive behavior early on with training.

Sealyham’s need moderate exercise.  Since they have a hunting background, they will chase after anything that runs.  That’s why you would need a fenced yard.  If you have an unfenced area, be sure they are on a leash.  It would be better not to pair them in a household with smaller animals that run, such as cats or rabbits.  It’s a Sealyham’s instinct to chase and capture whatever is fleeing.  As far as grooming goes, although they don’t shed much, they do need a clip every few months to keep their hair free of mats.  You can read more about Sealyham Terriers here.  Enjoy watching these Sealyham Terrier puppies joyfully playing in the garden.

If you enjoy this video, here is another video of a Cairn Terrier for you.