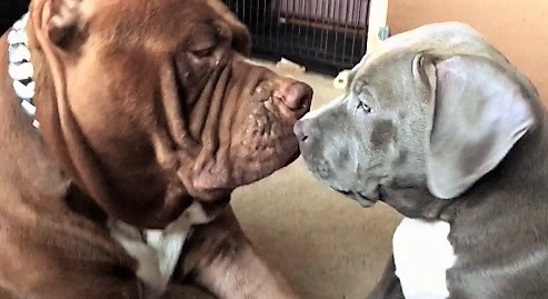 In this video, we get to witness a sweet Pitbull father playing with his puppy.  He is so good playing tug with the energetic puppy.  Even when he’s tired and rather be left alone, he lets his puppy do the mouthy thing.  The owner probably recognizes the need for the Pitbull dad to have some downtime, so he gives some special attention to dad.  Toward the end of the video, we see a sweet scene of the puppy sleeping on his dad.

The American Pitbull Terrier is a family and companion dog.  Its role has evolved over the years, from a bait to bulls to farm dogs to nanny dogs, according to Dog Time.  They were called nanny dogs because they are so gentle with children.  They are very loyal to their adopted family and protective of them.

Like many big dogs, they don’t know that they aren’t lap dogs.  Pitbulls love people.  They’ll let you know that there are strangers approaching because they want to greet the guests, which makes them not the best guard dogs. However, they will protect their family with their lives. They are very loyal.

Pitbulls love children.  They are sweet and loving. They are also very tolerant.  And they’ve got the energy to be great playmates for children.  Like any dogs, always teach children how to approach and respect dogs.  They should not be pulling on the ears and tails of dogs, or approach them when they are sleeping or eating, or try to take the dogs’ food away.  These seem common sense to adults, but it’s important to demonstrate this to the young ones.

Like any other dogs, socialize Pitbull puppies so they become comfortable with new people, sights, sounds, and situations.  Many Pitbulls are also friendly with cats and other dogs.  You can read more about this breed here.

If you enjoy this video, here’s another Pitbull video you might also enjoy!