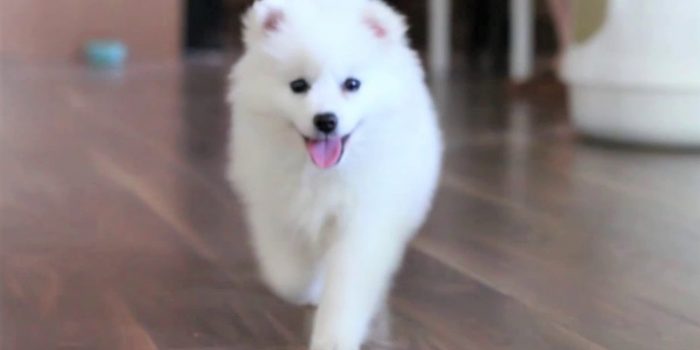 This is a video of Abbie’s first few days in her new home.  Abbie is an American Eskimo puppy. What a happy pup.  Look at the bounce in her walk.  So joyful, so light-hearted.  Abbie is definitely not camera-shy at all.  She looks right into the camera lens in quite a few clips.  Her sleep positions are amusing to watch too.   Actually she sleeps so deeply that even though her parent slide her a few inches, she did not even notice the movement.

American Eskimo dogs are called Eskies for short.  Originally, they were bred in Germany as a farm dog, according to AKC.  American Eskimo is a very intelligent dog.  They learn new things quickly, and they’ll learn commands without much repetition.

They often figure out how to do things by watching either a human or another dog.  Bright, right?  The Eskies love to be with their people, so they are willing to do just about anything to spend time with you.

It is good to have a fenced yard for your Eski to run around and gets the exercises he needs.  It is also a good idea to enroll your Eski in a puppy training class, writes AKC.  It will help him increase his confidence as he encounters different people, situations, sights, and smell.  He’ll become a well-rounded adult.  And while you are attending the class with him, not only will he get the exercise he needs, the two of you are forming a closer bond.  Here are some fun facts.  Starting in late 19th century, Eskies became popular in travelling circus in the U.S. performing dog tricks.  In fact, it was an Eski who was the first dog to walk across a tight rope.  You can read more about the American Eskimo here.  Enjoy watching Abbie in her first few days home.

If you enjoy watching this video, here’s another one with American Eskimo puppies playing.