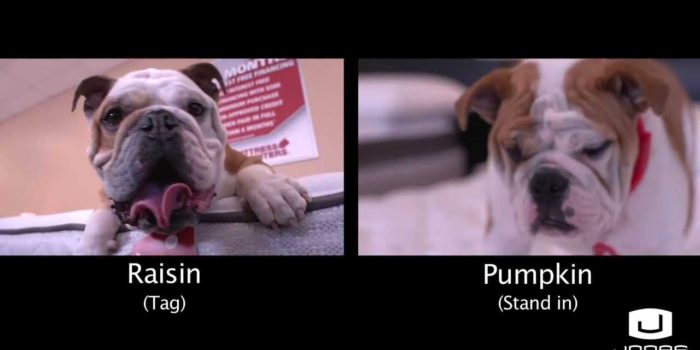 Have you ever wonder how commercials with dogs and puppies are made behind the scenes?  The final clip tells a story.   Yet, when it’s being made, that wasn’t the case.  The magic is in the editing afterwards.

This video is behind the scene footage of a puppy commercial for Mattress Discounters by Jones Advertising.  It shares some of the “secrets” in working with dogs and puppies in a commercial.  The star Bulldog is Tag, who has been in another commercial for the same company.  In this video, he’s got a puppy co-star.  Because Tag wasn’t particularly interested in working with the puppy (at least on this day), the crew needs to film them separately. then do some magic in the editing so they look like they are walking together.

Working with puppies in a commercial

The narrator says that working with a puppy is 10 times more challenging than working with an adult dog.  An adult dog has already been trained to some extent to follow commands.   Still that is no guarantee that they get along with other dogs or with puppies.

Some dogs are better working alone, while others are much more open to being around other dogs.  This is a possible factor when training a dog to do commercials.   But sometimes the client wants a certain breed for the commercial, so you work with what you have.

Puppies get tired easily, depending on how old they are when the commercial is shot.  And when they are tired, no amount of prompting is going to do any good.  I remember seeing a puppy whose parent was ready to leave the park, but the young pup was so tired he could not take another step.  So Otis just plopped down right there on the grass to rest.   Mom pleaded with him for 5 minutes to no avail.  Then when he was sufficiently rested, he was willing to listen to her prompting again.  So imagine working with this on a commercial.   The crew has to stop working because a puppy may need a nap.  But the cuteness is totally worth the effort.  Enjoy this rare behind-the-scene footage.