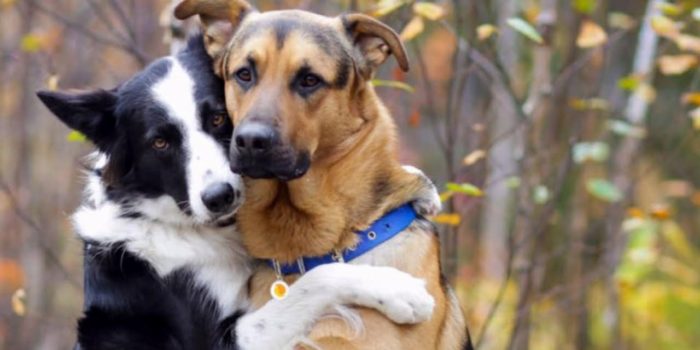 The Border Collie and German Shepherd in this video are best buddies.  The Border Collie is Lottie, and she was adopted when she was 4 months old.  The German Shepherd is Grizzly, and he was rescued at 7 weeks old, a year after Lottie was adopted.  You know how some people worry about having 2 dogs adopted at different times, and whether they would get along with each other?  Well, their human mom don’t have to worry about these two.  Lottie and Grizzly have the most beautiful relationship.  Talk about good friends!  Their owner, Taylor Duguay, says the dogs are well trained and can do plenty of tricks. However, hugging isn’t something she trained them to do, it just came naturally, especially for Lottie.  As Duguay explains it, from day the two dogs met, Lottie thought Grizzly was her dog, so she treats him with an almost human-like kind of love.  Lottie has taken it upon herself to care for and love Grizzly from Day 1, as if he’s her own pup.  The two are inseparable.  Even when they are watching TV, they cuddle and groom each other.

If you are bringing a second dog home, either to foster or if you have someone moving into your home who has a dog, a positive introduction is in order.   Sherry Woodard writes about this topic in Best Friends.  If the new dog is from a shelter, you can ask someone at the shelter to help you with the introduction.   The first meeting needs to be in neutral zone to avoid territorial issue.  When you take them home, try to arrange for the dogs to be in separate cars.  Again, territorial potential.  At home, put away all food bowls, toys, so the new dog won’t be intruding on the resident dog’s possessions.  If there is a high value treat, like chewies or Kongs, (and actually at feeding time) separate them so they are not in the vicinity of each other.  Do this until they are very comfortable with each other and have become good friends.  You can read Sherry’s entire article here.