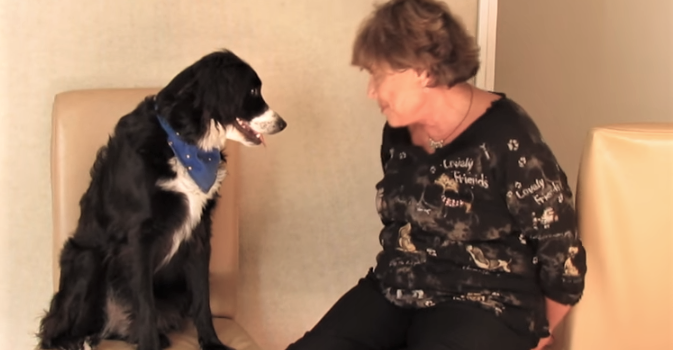 This math genius is most impressive with the kind of math problems she can solve.  Oreo is a Border Collie mix.  In this video, she answers impromptu math questions.  No rehearsing whatsoever.  Oreo is adopted from a shelter.   Her mom is Penny Miller, who taught her previous dog, Cookie Einstein, (also adopted from a shelter) to do addition, subtraction, multiplication, and division in both English and Spanish.

Penny says that Oreo was only around Cookie Einstein for 2 months, and somehow picks up Einstein’s math and language skills.  What are the chances that Penny has 2 dogs in a row who turn out to be math prodigies?!  Could her interest in teaching math to dogs somehow attracted dogs who are interested in doing math?

The questions that Penny poses to Oreo require thinking through a math problem.  This means Oreo first needs to understand the language well enough to decode beyond simple words.   Not only does she answer questions in English, Oreo understands math questions asked in Spanish as well.

Sometimes we can see Oreo thinking as she count mentally.  Penny then invites the audience to ask impromptu math questions, so they know that Oreo did not just memorize the questions that Penny asked her.  The audience can choose to have the question asked in either English or Spanish.

Using Spanish, Penny asked Oreo, “What is 9 minus 4?” (Que es nueve menos cuatro?)  Then someone from the audience asked a difficult question–“What is the square root of 9?”  How does a dog grasp the concept of square root?!!   This is one genius dog!  Enjoy  being impressed by Oreo, the math genius.