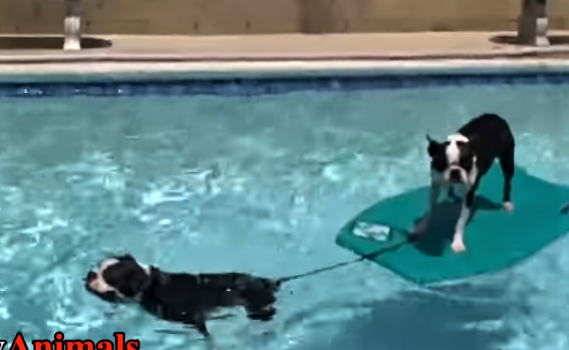 Such an interesting life these Boxers have!   Actually, such interesting mind!   Boston Terriers have a sense of humor, and their passions in life are playing games and chasing balls, AND YOUR companionship!

This breed is developed in Boston, Massachusetts, hence the name, Boston Terrier.  While there are general traits, Bostons are quite individualistic.   Some are clowns; some are dignified and calm.  There is general agreement that Bostons are polite.   According to Michele Welton on Your Pure Bred Puppy, some Bostons are one-person dogs, with a special affinity for the elderly.   They are very sensitive to your moods.   Many are outgoing.  Even those who are a bit standoffish are polite.  They will bark to let you know that someone’s at the door.  To that extent they are good watch dogs.

What endears Bostons to many people are those large expressive eyes, the way they cock their head when they look at you.   And the snorting noise they make.   You just can’t help but smile.

Bostons get along with other family pets.  It’s not uncommon to see one napping with a cat.   When they spy a large dog across the street, they might put up a show, but they are seldom truly aggressive.

The Boston is a good choice for a first time dog-owner.   While they are small, they are sturdy, so you don’t have to worry about handling a delicate dog.  Those expressive eyes…who wouldn’t want to interact with them?  His hair is easy to care.   He is polite with everyone and other pets.  However, if you are noise-sensitive, you might reconsider.   He snorts, snores, wheeze, and he slobbers.  Because of his short face, he swallows air when he eats, which means gassiness.  If you don’t mind living with a flatulent dog, then you’re fine. 🙂  On the other hand, because of their short face, there are potential health issues that come with a Boston.  You can read more about this breed here.