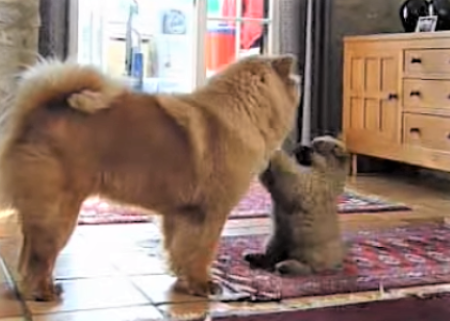 The Chow Chow in this video is adjusting to her new sister.  Her name is Rosie, and the new puppy is Tessie.  Both Rosie and Tessie had the same parents, just come from different litters.  A puppy always brings new energy.  Rosie does not know what to make of the rambunctious puppy at first.  Tessie is bold in her moves, even stealing a bone from right under Rosie’s nose.

When the family dog meets the new puppy

Over a couple of months, they became better friends.  Tessie loves her big sister and follows Rosie everywhere.  I remember a family with 2 older dogs bringing in a young puppy.  In their case, it was a stressful time for the older dogs, who found the puppy way too rowdy for them.  Energy level wise, it was not a good match, so the family re-home the puppy, who ended up with the perfect family with another dog who loves to play with the new puppy.

A woman wrote to Cesar Milan in Cesar’s Way about a similar situation.  She already has 3 dogs who are in a stable pack.  They are getting older and she wants to bring in a puppy.  She asked Cesar how to make this transition smooth if she were to bring home a puppy.  Cesar explains to her that if the dogs are older, they may not be interesting in being a parent.  However, if she can find the one dog who has the youngest state of mind, that dog can take the puppy under his wing, and eventually thinks of the puppy as “his puppy.”

For the puppy to be accepted by the older dogs, she needs to have her social skills in place.  And tire out the puppy first before having her interact with the older dogs so their energy level is not so far apart. Take her for a walk, so she has a chance to channel some of their energy, then have the supervised playtime with the older dogs.  This way, your older dog would not be stressed out by the possible rambunctious energy of the puppy.  You can read the rest of his guidance here.  Do you have an experience of introducing a puppy to your older dogs? Share your comment at the bottom of the page.