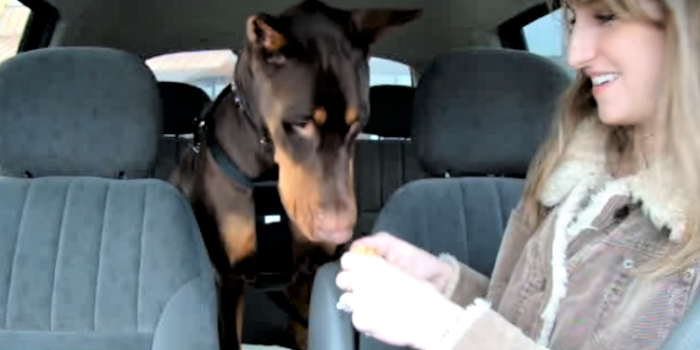 He whines as his Mom places the order at the drive-thru window.  This must bring a smile to the drive-thru associate.  Red’s mom wants to feed him bit by bit.  But look at that large mouth!  Red would have none of that.   I can just hear his words, “Just put the whole burger in my mouth!”  But he has good manners, and tolerates the small bites.  For a little while, at least.

Characteristics of the Doberman Pincher

A little tidbit about the Doberman Pincher.  According to the American Kennel Club, this breed originates in Germany around 1890.   The breed is named after a tax collector named Louis Doberman Apolda.  He wanted to have a medium sized dog who can be both a companion and a guard dog.

Not all Dobermans have the same temperament.  However, the breed’s temperament (the correct breed temperament, that is) is trustworthy with the master’s children and friends.  They are affectionate and obedient.  Loyal too.  Very trainable.  That’s why they are trained to work as police dogs.

AKC writes that earlier Dobermans were rather sharp and aggressive.  However, today’s Dobermans are decreasing in sharpness.  Perhaps this is deliberate in the breeding strategy.  AKC also mentions that Dobermans are not meant to live outside the house alone.  And they aren’t meant to live in a kennel.  However, if you were to have 2 Dobermans, AKC recommends that you do not have 2 adult male Dobermans together.  You can read more about the Doberman here.