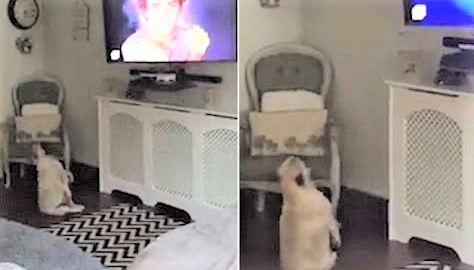 Is this an amusing video or what?!!   A Bulldog who loves her favorite song so much that she just can’t stop dancing to the music.  The song she is dancing to?  Wake Me Up Before You Go Go.  An upbeat song.  Her name is Minnie, a 2-years-old cross between a French and English Bulldog.

When the song came on the TV, Minnie starts bobbing her head up and down.  She starts out facing the TV screen.  As she bobs, her body rotates, and she can no longer see the screen.  Still she keeps dancing.  We can hear her Dad stifling a laugh in the background.  Her Dad says that when some song comes on the radio or TV, Minnie will start rocking for 10 or 15 minutes.  That’s a pretty long time for a dog to dance.  What stamina!   THAT’s the spirit of a true dancer!

Her sister dog, Mollie, walks over to Minnie to see what she is up to (probably raising an eyebrow.) Minnie keeps right on rocking, ignoring any “remarks” her sister may imply.  Way to go, Minnie! Ignore the critics.  Just keep doing what you enjoy!  It’s not surprising that dogs respond to music.  Some more than others.  Music with short, repetitive notes are stimulating, as you can see with Minnie.   If you want to invite your dog to dance, choose an upbeat song.

On the other hand, music with a rhythm closer to THEIR heartbeat are soothing.  That is why some shelters and kennels play calming music.  Some classical music accomplishes that.  Not all.  When dogs are in an unfamiliar environment, or when they are feeling stressed, a calming environment can help some of them.  And if you want to leave the radio on for your dog to keep them company, consider recording music that are soothing, and play them instead of leaving the radio on, as you can’t tell what comes on the air!  Have fun watching Minnie dance to Wake Me Up Before You Go Go.