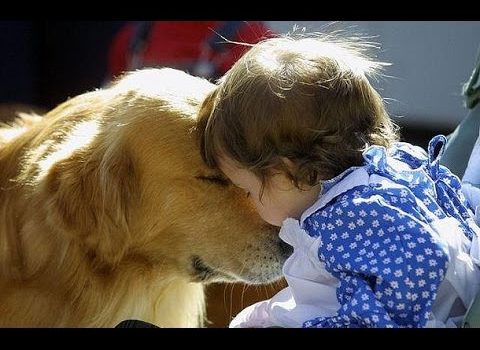 All the Golden Retrievers in this video are such wonderful nannies.  You have probably heard that Goldies are very good with children.  For the most part that is true, but not all of them, according to Golden Retriever Rescue of Mid-Florida.  And they would know what they are talking about because they have rescued 3515 Golden Retrievers since 1991.

Many of them came from families who had to part with them because things just didn’t work out with the young children.  They became too much for the family to handle.  That is why this particular rescue organization typically recommends that a family waits until their children are at least 7 years old before adopting a Golden Retriever if they have never had a large sporting dog before.

Families that are the best match for Golden Retrievers

A puppy Goldie is of a manageable size.  But in a couple of years she turns into an 80 pound dog.  Unless the family has invested time in obedience training, and gives their Goldie the exercise they need, things can happen.   It’s easy for a large dog to accidentally knock over a child.  Or if a child doesn’t know how to play gently with the dog, perhaps pulling on their tail or their ears too hard, someone is going to object.  That is why with a large dog like a Golden Retriever, it’s better to match family with older children.

This rescue organization will make exception to this recommendation.  For example, if the family has had large dogs before, or if the dog being considered has been around young children, that might work out.  This caution is for the happiness and safety of both the family and the dog.  Who wants to give up their beloved dog?  And which dog doesn’t want to live happily ever after with a family she’s grown to adore?

Besides the young children factor, make sure that the supervising adults are in agreement in getting a dog.  It is like having another child to take care of.   You can read this excellent article here.