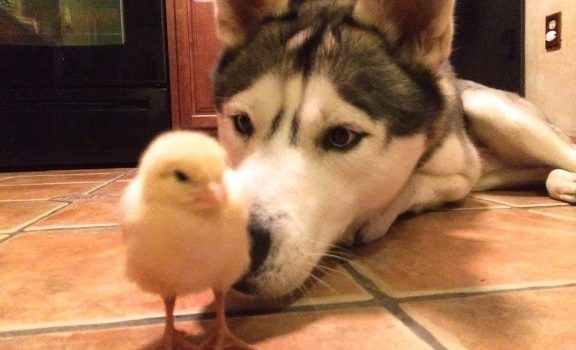 This is a sweet video of a Husky befriending a baby chick.  Seems like an unlikely friendship.  Yes, here it is, on film.  The Husky’s name is Gohan.  His parent saw a baby chick all by itself, with no one around it.  Perhaps it has wondered off, and did not know how to get back home.  So Gohan’s parent brought it home with the intent of taking it to a bird shelter.  Who’d knew Gohan became enamored with this baby chick.

His parent was there the whole time when Gohan interacts with the baby chick.  Gohan lets the chick sit on his head, sleep against his tummy to stay warm.  He follows the chick around, watching her every step.  And when the chick was inside her cage, Gohan stood up on the counter to watch her.  Not predatory watching, but as in wanting to be with his pet every moment.

Gohan is not like most Huskies.  According to Siberian Husky Assist Rescue, Huskies are highly predatory.  This means your neighbors need to keep their cat, their rabbit, their chicken, and even small dogs away from your Husky.  Yet, Gohan does not display the predatory trait.  Know that this is NOT typical.  So do not bring a baby chick home for your Husky after watching this video.

If you are thinking about getting a Husky, know that this is not a dog to leave out in the backyard.  They want to be part of your family.  Husky is bred to be a working dog, so give him a job.

It is highly recommended that you train a Husky.  Mental stimulation is important for this breed.  In fact, the writer of the article shares that if she teaches her Husky for just an hour, it’ll tire him out even more than playing in the dog park for 6 hours.  Just a suggestion for future reference.

If you enjoy this video, here is another one of a Husky puppy sounding like a human baby.