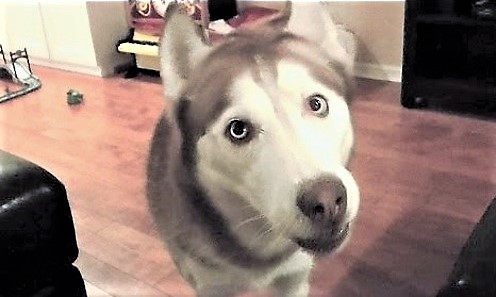 Remember Laika and Mishka the Huskies who like to speak?   Mishka is the Husky in the background who’s known for her talking and singing.  Laika is the one talking in the video.  And she has a beautiful voice as well.  Mishka is the first dog the family got.  Laika came later.  Many videos were made of Mishka’s “talk” and “singing” because she so loves to use her voice.  In fact, William Shatner saw a video of Mishka saying “I love you” and he imitated Mishka’s voice when he went on a talk show.  A man imitating a dog imitating human.

How this dog learns to say “I love you”

Now in this video, Dad is teaching Laika to say “I love you” just as he taught Mishka.  Laika is practicing the pattern.  She is a little less vocal than Mishka is.  Nevertheless, Dad wants to reinforce this behavior.  With every imitation, Dad praises her.

It really didn’t matter to him that Laika wasn’t using the inflection in the phrase.  He just wants to reinforce Laika’s behavior of repeating the phrase however makes sense to her for now.

Some dog breeds enjoy vocalizing more than others.  Among the top dog breeds who like to “talk” are Siberian Huskies.

Matthew Gardea, the human parent of Mishka and Laika, first encouraged Mishka to talk because he just wanted to communicate and bond with her.

He imitated the wolf howl and got Mishka going.  Then over a period of time he and his wife noticed that Mishka was imitating their tone and syllables.  She was especially good in repeating “I love you” so the parents kept repeating it to Mishka.  It was kind of a party trick, Matthew told Alan Van on New Rockstars.  You can read more about this story here.   Enjoy listening to Laika learning to say “I love you.”