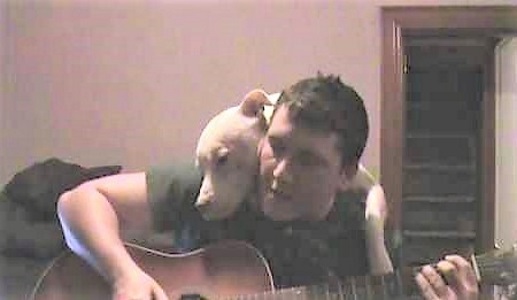 The Pitbull in this video loves it when his Dad plays the guitar.  His name is Doogie.  The lyrics of the song were written for Doogie.  Part of it says “Doogie would you like to go outside?  Doogie would you like a cookie?”  Doogie recognizes those words and kisses his dad.  What an affectionate dog, to wrap his arms around his dad’s shoulders when his dad is playing the song for him.

How does music affect dogs?

Patricia McConnell did research on the effect of music on dogs.   Dogs who stay at shelters have been observed to respond differently to different kind of music.  Classical music that feels soothing brings out more calming behavior and less barking.  Heavy metal music does the opposite. Patricia does not want to generalize the finding, so she digs deeper into other research available on the topic.

What she found was that if the tempo of the song matches the resting heart rate (or breathing) of a dog, the effect tends to be a calming one.

Some dog owners keep the music on when they leave home for work to keep the dogs company.  When they are around to watch their dogs’ response to different types of music, they observe similar results as Patricia. However, the effect also varies from individual to individual. That makes sense, not all humans prefer classical music.  And not all classical music is calming. Some people do play calming music near bedtime to help their dogs transition from playtime to slowing down for the night.  You can read more about Patricia’s research here.  Enjoy watching the sweet interaction between Doogie and his Dad.

If you enjoy this video, here is another one of 2 Retrievers who love music.