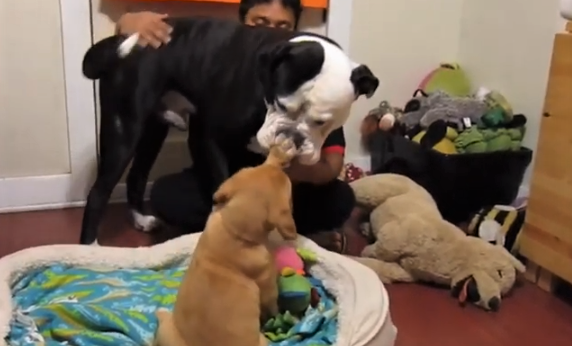 Now, this man knows how to be a diplomat when it comes to introducing his dog to the new puppy. He stays nearby, not interfering, not guiding, simply being available to both dogs.  He lets them sniff each other to their hearts’ content.  This is the first night puppy Ruby spends with the family.

She is a 2 months old Dogue de Bordeaux.  She decides to break the ice and gives the family dog a hug.  His name is Bubba, an American Bulldog who is 2-years-old at this filming.  Ruby knows to roll over when Bubba wants to sniff her.

(in Turner and Hooch)

When Bubba wants reassurance from Dad that the new puppy would not replace his importance, Dad puts a reassuring hand on him for as long as he needs it.  Ruby had just gotten off the plane earlier in the day.   She is handling her meeting quite well. Perhaps dogs do not get jet-lag. 🙂

I appreciate how sensitive the parents are in introducing Ruby to Bubba.  They simply let Bubba sniff Ruby, her toys, her bed, and let the two get acquainted at their own pace, not encouraging or discouraging interaction.

Remember the 1989 movie “Turner and Hooch” starring Tom Hanks?  The dog in that movie is a Dogue de Bordeaux (DDB).  According to Vetstreet,  DDB love their humans and always want to be with them.  If you are planning to get one, be prepared to share your couch and bed.

Because of his short nose, it’s hard for him to cool off properly through panting, so keep him comfortable in air-condition when it’s hot outside.  Don’t leave him outdoor or exercise him in the heat.  The Bordeau is not a dog for a first-time owner.  You can read more about Dogue de Bordeaux here.