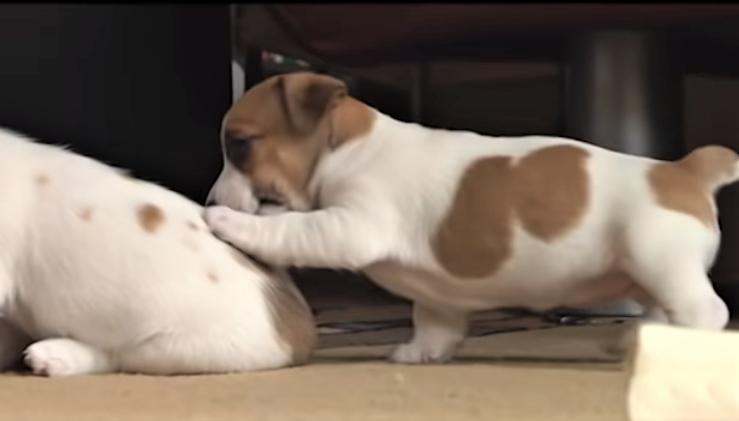 The Irish Jack Russell Puppies in this video are having fun together.  Already they are being a bit rambunctious.  Seldom is there a video on these puppies.  Mostly we see videos of Jack Russell’s grown up and doing some amazing tricks, like Jesse.

The Irish Jack Russell looks very much like a typical Jack Russell, according to Jack Russell Lover.   The main difference in temperament is that the Irish is more of a companion dog.  The kind of Jack Russell that we usually see is more intense and active.  Jack Russell’s are loving, friendly, and devoted.  They have no fear, which could put them at risk if they decide to confront a much larger dog.  Actually, this attitude can go either way.  The larger dog might be frightened by the attitude.  Or the Jack Russell will learn not to mess with big dogs on their own.

Russell’s appreciate structure and routine.  You can offer them this by doing the same thing around the same time everyday.  That will help to build a sense of routine for them.  If you really want to have a Jack Russell but have young children, you might consider an Irish Jack Russell instead because they are calmer.

Enjoy watching these active Russell puppies playing rough with each other.