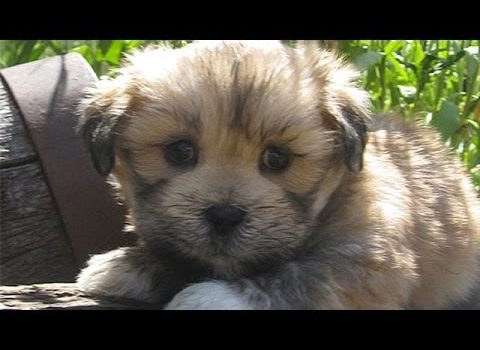 This is a video of the most beautiful Lhasa Apso puppies that lift our spirit.  One look at these faces, and it’s impossible to not smile.  On some puppies, their nose looks like the center of a flower, and the fur around it like the petals.

Lhasa Apso–guard dog for the monasteries

The Lhasa Apso is a most special dog.  Its history is fascinating.  This dog is named after the sacred city of Lhasa in Tibet, according to Small Dog Place.  They served as watchdogs for monasteries.  If any intruder managed to sneak past the guards, he won’t get past the Lhasa Apso.  This furry guard will warn the residents.  Lhasa Apsos are very good at their job, that’s how they earned their reputation as guard dog for the monasteries.

Lhasa Apsos were first introduced to the U.S. as a gift from the 13th Dalai Lama. That’s quite an honor because Lhasa Apsos are considered to be such sacred dogs in their homeland.

How much exercise does a Lhasa Apso need?

Lhasa Apso can live anywhere.  They can live in an apartment or a condo.  Even though they need their exercise, if you forget to walk them for one day, they are not going to tell you about it.   It’s not that they don’t like to exercise, they are just not demanding about it like another breed might.  They are not going to dig holes in the yard to let out excess energy.

What is the ideal family for a Lhasa Apso?

They would do well for families that are less active. Lhasa’s are exceptionally healthy dogs.  Some even live into their twenties.  The oldest recorded Lhasa lived 29 years! Lhasa Apsos adore their families. They are very loyal dogs, very loving, sweet, affectionate.  They are good with children, especially children who have learned to approach and respect dogs.  Still, they need proper socialization as puppies, like all dogs.   You can read more about Lhasa Apso here.  Enjoy a delightful minute of watching these beautiful Lhasa Apso puppies.