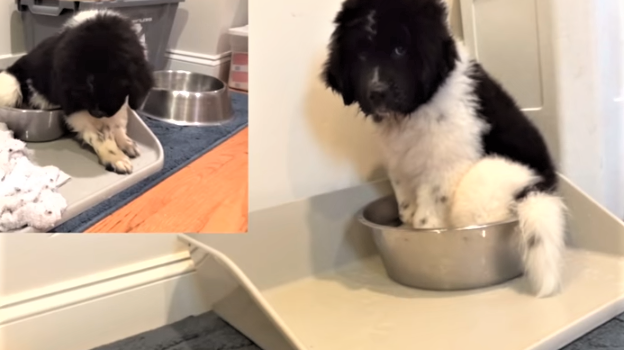 What else is a water bowl good for?  The Landseer Newfoundland in this video loves to sit in water.  So his water bowl now has dual purpose.  His name is Dethan, and he’s only 13 weeks old at this filming.  He is a water dog to the core!  He gets his paw wet first, as if he’s testing the water. Then he sits in the water bowl to be wet.

The videographer filmed pretty much the same scene 3 weeks before this video, when Dethan was younger and had a smaller water bowl.  He did the same thing.  Some habits are too cute not to continue.  Hope he continues to do this, however old he gets.  By the way, the beautiful name of Dethan means “August Spirit.”

In the U.S. and U.K.  Landseer Newfoundland is considered the same breed as the Newfoundland.  It is not the case in some European countries.  The puppy in this video points out a characteristic of Newfoundland.  They love to get wet!

According to Dog Breed Info, there are just so many wonderful qualities about the Newfoundland.  They are sweet tempered, loyal, intelligent, courageous, calm, patient.  These are just a few of their noble qualities.

How Newfoundland dogs protect their family

Newfoundland can recognize a dangerous situation, and if they feel that their family is threatened, they will take action.  Being the brave dog that he is, he will put himself (his body) between his family and the intruder instead of barking or growling.  And he has the intelligence to act on his own, if that’s what’s called for.  They are playful and loving with children.  Very social dogs.  They are sensitive to the tone of your voice, so when you train them, be sure to use a calm and confident voice.  You can read more about this breed here.