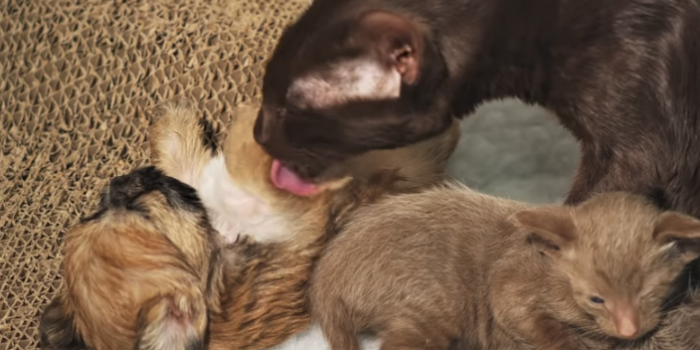 The puppy in this video was adopted by a cat and has to learn how to fit into a family of cats.  He was rejected by his mother, but was fortunate to be adopted by a mama cat.  The cat had her kittens on the same day that the puppy was born.  Her instinct and hormones are so strong that she adopts the puppy as her own.  It’s a good thing that the puppy looks for nourishment from the mama cat, and that the cat cleans and licks the puppy as if he is one of her kids.

A beautiful story of a cat adopting a puppy

Kittens live by different social rules than dogs, even when they are nursing.  They are orderly during feeding time.  Each kitten remembers her own feeding spot.  This puppy does not know these rules, and he is breaking one rule after another.   This upsets the feeding kittens.  The Mama cat lifts her head, sees what’s happening, and goes on with her feeding as if everything is just fine.  How wonderfully accepting of her!

This actually is not an unusual story.  The Huffington Post wrote about an animal shelter in Georgia in a similar situation.   Two orphaned puppies were brought in.  They were only 2 weeks old,  too young to go on solid food.  There happened to be a couple of nursing mama cats, who don’t mind one bit to have one more mouth to feed.  Each of the cats took in one puppy, nursing the pup as her own kitten.  Mother instinct saves the day.  The puppies sleep with the kittens, feeling a part of the family.  The staff at the animal shelter shares that if the match didn’t work out for whatever reason, their backup plan would be to use a formula filled syringe to feed the puppies.  You can read more about the animal story here.

Enjoy watching this puppy fit into his new cat family.