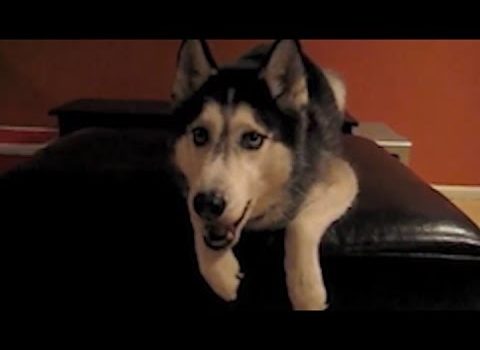 In this video, Mishka the Husky speaks clearly.  The words “hello” and “I love you.”  Mishka is known on the internet as the Husky who likes to sing and talk.  Her voice is melodic, like many Huskies.  Her claim to fame is her voice’s proximity to human speech.  That’s why she’s been on TV shows such as The Today Show, Live with Regis and Kelly, Nightly News with Brian Williams.  Mishka has also done commercials for Sony and Purina.

When Mishka’s parents first met her, they KNEW they had to adopt her.  She looked nervous to them, and they wanted to provide a loving home for her.  Even as a puppy, Mishka loved to talk.  It sounded as though she was saying “I love you.”  So her parents repeat what Mishka said.  And Mishka said it back, quite clearly.  Soon her parents start having Mishka “talk” as a party trick.  A couple of years later, her Dad put her video on YouTube, and the rest is history.