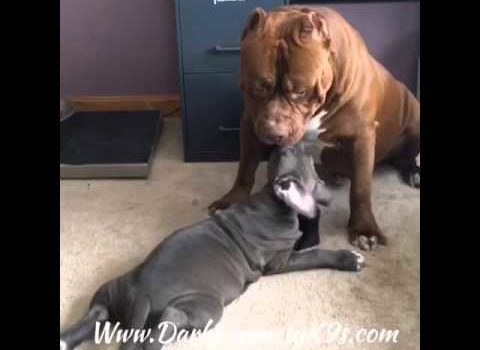 This video shows several sweet scenes of Pitbull Hulk and his puppy son relaxing together.  The person that posted the video writes in the title “Like father, like son” which is a really apt description.  It looks as if the son imitates every position the father sleeps in.  He must be very fond of dad.

There is an informative article written by Paws For Praise on how to train a Pitbull puppy.  Provide opportunities for your Pitbull puppy to interact with many different people and many different dogs, especially during weeks 8-12.  When playing with them, do not wrestle on the floor, and do not play rough.  There are studies that show playing rough can foster aggressive behavior.

How to train a PitBull puppy

When you play tug, use a tug rope.  This is a game that will take care of 2 things at a time.  One, it’s fun for the puppy.  Second, you can use this game to teach the puppy to let go of the rope by offering a treat and say “trade” at the same time.  So the puppy associate letting go of something at your request with a reward.

Another useful skill to teach early on is “watch me”.  When you walk your puppy on a leash, and he sees a cat or bird that he wants to chase after, say “watch me” and reward him when he does.  For example, if the puppy sees a cat, and when you say “watch me” and he turns his attention to you and leave the cat alone, reward him with something he wants.  A favorite toy for instance.

Here’s another tip.  From week 8 to week 16, help the puppy associate being touched and handled by you is a great thing.  For example, touch the puppy and quickly give him a food reward with your other hand.  Also touch the puppy in “off limits” area, so when he goes to the vet or to the groomer, he won’t be surprised.  And neither will the vet or the groomer.  You can read more good ideas from the article here.  If you enjoy this Pitbull video, you might also enjoy this one.