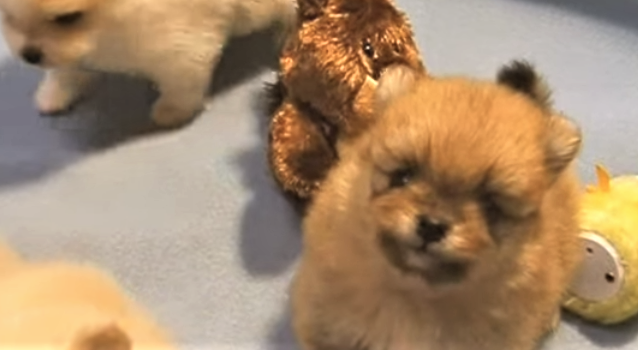 The Pomeranian Puppies in this video, even though very young, are already showing their personalities.  The background music is just perfect for this video.

Dog Time writes that the nickname for Pomeranians is “The little dog who thinks he can”.  That about sums up his life philosophy.  He is an extrovert.  He is lively, he is smart, he likes to meet new people, and he gets along with other animals.  That’s a lot to say about one little dog.

Why is it important to train a Pomeranian?

It is possible that a Pomeranian thinks he is bigger than his actual size, which means he might challenge dogs many times their own size.  To protect these little ones from such unwise actions, it’s good to train them early on not to challenge dogs that are larger.  A Pomeranian would make a good watch dog because he would bark at anything that is unusual.  Do teach them to stop barking at command.  Otherwise, they don’t know when to stop.  This saves on your nerve and your relationship with neighbors.

How to socialize a Pomeranian

Poms need to be socialized early on.  Expose them to many people, sounds, sights, experiences.  Enroll them in puppy kindergarten.  Whenever you can, take him to stores that allow pets, parks, so he can develop his social skills.  Invite your friends to interact with him so he is accustomed to interacting with a variety of people.

The Dogs Journal has an article that goes into more detail about Pomeranians.