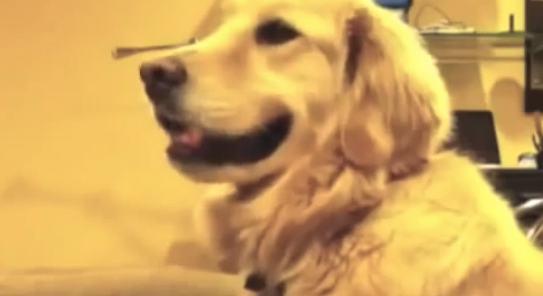 Can there BE a more appreciative audience?  The Golden Retriever in this video LOVES the sound of guitar.  His name is Bailey.  Turn up your volume so you can watch this dog’s reaction to guitar music.  Notice how he bobs his head slightly as he listens.  And watch his face when the music stops.  His reaction is a great compliment to either the guitar player or simply the sound of guitar.

Interesting stories about dogs and music

You might have seen videos of dogs who are great music appreciators, either singing or dancing.  I was curious about this topic, and read an article by Stanley Coren in Modern Dog Magazine on this very subject.

Dr. George Robinson Sinclair is an organist at the Hereford Cathedral in London. His Bulldog, Dan, has exceptional musical ears. So much so that Sinclair would take Dan with him to choir practice. If anyone sings out of tune, Dan would growl at them! Now is that motivation for excellence or what!

Another story involves the famous composer, Richard Wagner, and his dog, Peps, a Cavalier King Charles Spaniel. This is no ordinary relationship. Wagner has a stool for Peps in his study. When he was composing, he would sing a passage or play it on the piano, and watch the reaction of Peps. Then he would modify his composition accordingly. Wagner noticed that Peps responded differently to keys. One key might get a calm wag, while another key would get an excited response. When Peps passed away, Wagner was devastated, and found it hard to compose until he got another dog named Fips (also a Cavalier King Charles Spaniel). Fips has a specially upholstered stool next to Wagner’s piano. Like Peps, Fips was co-composer with Wagner. You can read the entire article here.  Have fun watching this Retriever pay the greatest compliment to the musician!.