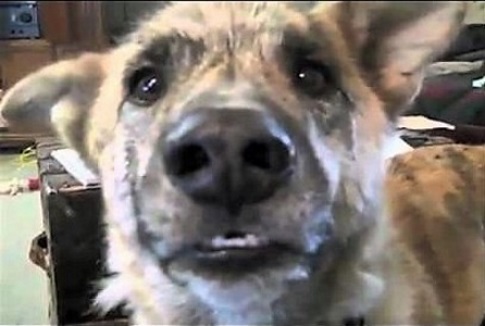 Talking Dog Clark G. wanting bacon is an oldie, but still timeless.   In this video, he does NOT appreciate being teased by his dad about food.   This is one of his most popular videos.   The voice-over artist of the Talking Dog videos is able to match Clark’s facial and body expression with the words.   And not just the script, but also synchronizing the lip movement of Clark to the words.  It is just brilliant!  This blog was updated on September 3, 2022.

What’s the story of The Talking Dog?

The Talking Dog’s name is Clark G. the dog.  His parents are Jennifer and Marc.  They got him from the Colorado Puppy Rescue after losing one of their dogs, writes Paul Bradley Smith.  Marc and Jennifer spent hours searching online for shelters.  The dog they had originally wanted to take home was adopted by someone else, that’s how they decided to go to the Puppy Rescue where Clark G. was.

At that time, his name was Puppy #55.  Another family was interested in him.  So Clark’s parents had to wait for that family’s decision.  After the Rescue center told the other family what is involved in caring for Clark G., they decided that this would not be the best match for their family because Clark did have some special needs.  So that’s how Clark came to join Marc and Jennifer’s family.  And that’s how he changed his name from Puppy #55 to Clark G.

The first night he was home, Jennifer noticed that he was scratching and crying all night.  She experimented with different food for Clark, did a bunch of research and found the answer that stops Clark’s allergy.  Now Clark G.’s diet is made of lamb and rice.  Clark also learns that there is a pecking order at home.  Layla was with the family longer, so she gets to climb in bed first with their parents.   Enjoy listening to the conversation between Talking Dog and his dad.

If you enjoy this video, here is another Talking Dog video for you.