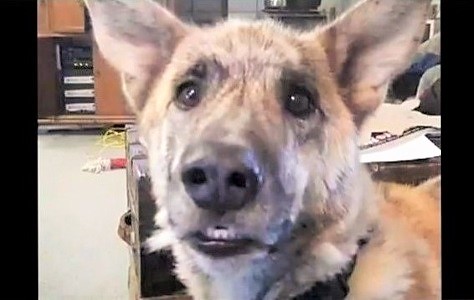 This is a video of the Talking Dog in a Pizza Hut commercial.  For those who are unfamiliar with the Talking Dog, it’s a voice-over artist Andrew Grantham speaking as the dog.  The lip movement and the words are so in sync that their videos delight their fans.  This video is a partnership between Pizza Hut and Andrew Grantham to launch their Ultimate Stuffed Crust pizza.  Now THAT’s a really smart business decision!

So in the video, Talking Dog wants to know what’s inside the pizza.  Andrew told him there are pepperoni, sausage, and cheese.  Talking Dog’s mouth is probably watering at this point.  Then Andrew makes a deal with the dog.  He wants the pizza so much that he agrees to every one of Andrew’s terms…until the very end of the video.

How Talking Dog was adopted by his family

The Talking Dog’s name is Clark G. the dog.  His parents, Jennifer and Marc, got him from the Colorado Puppy Rescue after losing one of their dogs, writes Paul Bradley Smith in his interview with the Talking Dog family.

The couple spent many hours searching online for shelters, and even went to Petco.  The dog they had originally wanted to take home was adopted by someone else, that’s how they decided to go to the Puppy Rescue where Clark G. was.

At that time, his name was Puppy #55.  Another family was interested in him.  So Clark’s parents had to wait for an answer.  After the Rescue center told the other family what is involved in caring for Clark G., they decided that the match was not right for them.  So that’s how Clark comes to be part of his new family.  The first night he was home, his mom noticed that he was scratching and crying all night.  She experienced with different food, did a whole bunch of research and found the solution that stops the allergy.  Now Clark G.’s diet is lamb and rice.  Clark also learns the pecking order at home.  There’s another dog named Layla, who gets to climb in bed first with their parents.  This is a really well written article.  You can read it here.