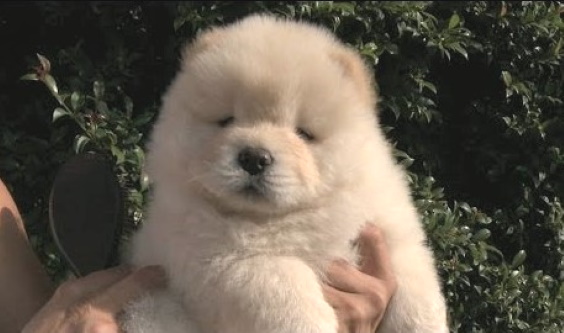 The Chow Chow puppy in this video enjoys getting his hair brushed.  He is so calm and sweet, letting his pet parent do whatever is necessary to make him look even fluffier.  Chow Chow’s are naturally clean and proud of their appearance, so brushing them regularly helps them to hold their image of themselves.  They KNOW when they look great.  Chow Chow’s are highly intelligent.  They sometimes attach themselves to one person or to their entire immediate family.

It’s good to socialize them early so that they feel comfortable with other people, other pets, and environments.  According to Chow Welfare, start this socialization as early as the first few days of the puppy’s life.  Pick up the puppy often and hold him close to you.  Talk to him quietly and pet him.  Let him get accustomed to your voice and to your touch.  Even if he seems to behave otherwise, he’ll get to like this.

How to socialize a Chow Chow

Start inviting friends to hold the Chow Chow so the puppy gets used to being held by people not his immediately family.  Invite children as well.  Make sure they are sitting down so they won’t drop the puppy.  Show them how to pet the puppy–approaching the chin and neck first.  Some puppies are head shy and do not like people to pet their head.

Expose the puppy to the sound of television, radio, stereo.  After the Chow has had his vaccinations, take them on car rides, and if strangers want to pet them.  If the puppy’s tail drops down, that’s a sign he’s uncomfortable.  Just reassure him.  Continue to expose him to different environments, people, and sounds.  This will help your puppy grow into a happier adult Chow Chow.  You can read more on this topic here.

Enjoy watching this Chow Chow puppy getting his hair brushed and enjoying it.