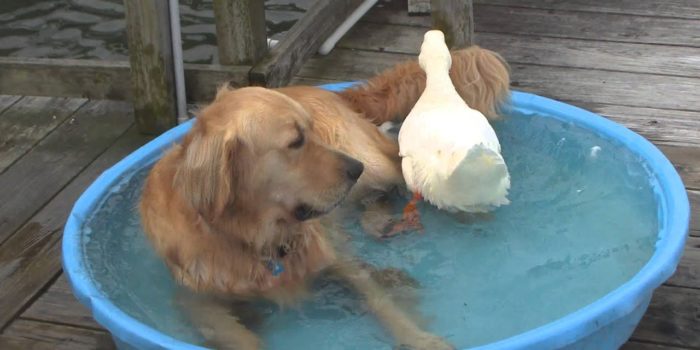 This is a sweet sweet story of a friendship between a dog and a duck.  Occy was a puppy when he met Biggie, who was just a duckling back then.  Frances, Occy’s pet parent, at first was concerned that the duck might hurt Occy.  You know how ducks could chase and use their beaks?

But that worry was not warrented.  Somehow the two became friends.  They even do everything together. They nap together, they eat grass together, they swim together.  Frances thought the duck would at some point join the other ducks by the creek that’s behind her store.  But Biggie had no interest in joining his tribe.  He became part of Marsha’s family.

Story of a dog and a duck’s friendship

Once the friends bonded with each other, Biggie seems to forget that he is actually a duck.  He now thinks he is a dog.  He would not even eat duck food. He eats dog food, just like his friend. And he drinks from the same water bowl. They also eat together.

This duo live in Atlantic Beach, North Carolina.  They like hanging out in this kiddie pool by the dock.  Since there are boats passing by, some people take photos and videos when they catch a glimpse of this unusual friendship.  Frances has become accustomed to this sight that she doesn’t think its strange anymore.

In the video, you see Occy dnnking Biggie in the water.  Like THAT would hurt a duck!   He plays with Occy like he would with another puppy on dry land, using the paw to pin down another dog.  Apparently they rough-house with each other, just like dogs do. Yes, Biggie has officially become a dog.   And when they get tired from playing, they take a nap together.  Often Biggie would sit on top of Occy.  Now THAT’s a really strong friendship.