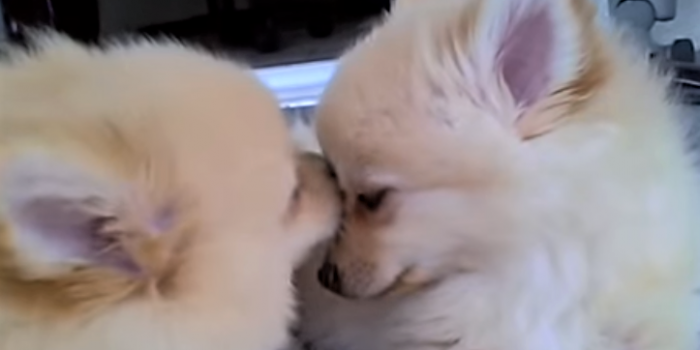 The Pomeranian brothers in this video are sharing a bonding moment.  Or maybe trying to get a taste of the food the other one just ate.  Actually, there could be several reasons why dogs lick each other’s mouths, according to Naomi Millburn on Cuteness.

Why do dogs lick each other’s mouth?

She did some research and gathered information from several sources in her article.  One of the reasons is what it looks like–showing affection to each other.   A version of sloppy kisses.  It can also be an invitation to play. Which means when our dog kisses us, that could be their way of inviting us to play with them.   Perhaps one way to test that theory is to start playing, and see if they stop kissing you.

One reason dogs lick is to say hello

Another reason for licking another dog’s mouth is an enthusiastic way to say hello.  Our human version of “I am so happy to see you.”  If this is the intent of the dogs, it is a sure signal that they are on good terms with each other.  There is also the interpretation that the dog doing the licking thinks the other dog is his superior.

Another reason dogs lick is to make peace

Still another reason of a dog licking another dog’s mouth is a way to make peace, to smooth things over.  If some conflict is starting on some level, one dog may lick the other to say “I’m not interested in a fight.  Let’s make peace, okay?”

Subordination is another reason dogs lick

There is still one more reason–subordination.  It’s admitting defeat or vulnerability.  Admitting his “inferiority” in relationship to the other dog.  Again, this is a way of saying “I want peace here.”  Now that’s a lot of potential interpretations of what looks like a simple kiss to us, isn’t it?  You can read more about this topic here.

Enjoy watching these Pomeranian twin brothers showing affection to each other.   If you enjoy Pomeranian videos, here’s another one for you.