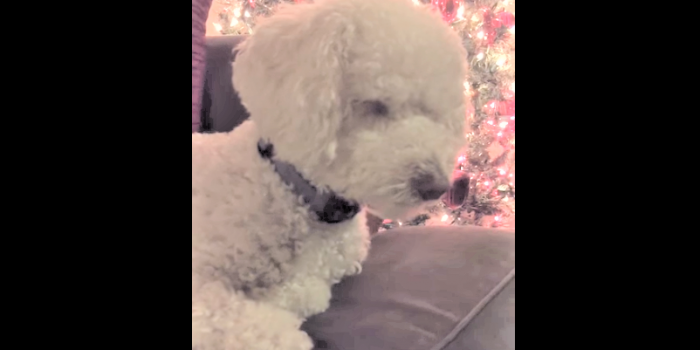 The dog in this video falls asleep in seconds listening to Mom’s lullaby.  It looks like this video is in real time.  At the beginning of the video, this dog’s eyes are still wide open.  As soon as the woman starts singing, the dog’s eyes start to close, as if on cue.  The entire video is only 52 seconds.  This is some powerful singing.

According to Laurie Darroch on Canidae, dogs respond very much to music.  It’s not so much a genre but individual pieces.  Tempo, volume affects how dogs respond.  If the speed is closer to their breathing rate or their heart rate, it feels more calming.  In this video, the woman’s song is slow, and her voice is fairly low.  In fact, toward the end of the video, it was almost a whisper.

Effects of music on dogs

Here is a post in which a Golden Retriever enjoys listening to guitar music so much that she bobs her head to the rhythm.   AND she smiles.   As soon as the music stops, her smile disappears.   And when the music starts again, back comes the smile.

And in this post, a sweet man wrote a song for his PitBull.  Watch how his dog hugs him as he sings.  Talk about appreciation for music!  It’s as if he KNEW the song was written for him.

And in this post, several Malamute puppies tilt their heads to the rhythm of the song.  Is it the pitch?   The rhythm?  It’s as if they were counting the beats.

So how do we apply this idea of dogs responding to music to their visit to the vets?  One study with 74 pet owners shows that if a dog and the owner were placed inside an exam room immediately after they arrive the clinic, with soft classical music in the room, there is less anxiety.  However, if they were to remain in the waiting room, the result is more anxiety.  Pet owners were more satisfied with clinics who are aware of music’s effect on dogs.  You can read about this study here.

Enjoy watching how a lullaby affects this responsive dog.