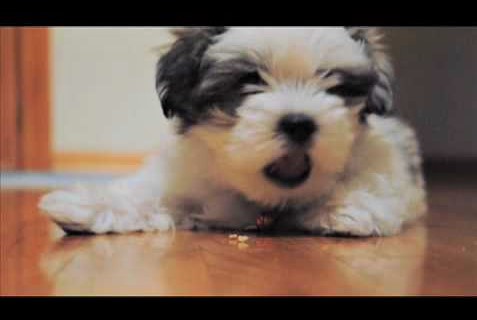 The Maltese Shih Tzu puppy in this video is Henri.  He is limitless in confidence.  And in energy!   At this filming, Henri is just 8 or 9 weeks old.  The way he pounces is just delightful to watch.

The video starts out with Henri carrying things in his mouth that are way too big for him.  But he carries them like a pro.  It’s fun watching the way he chews.  He doesn’t close his mouth.  He takes on toys larger than he is and thinks nothing of it.  He tries to snap at the camera.  The funny scene at the end is when he hops around energetically, then all of a sudden, hops over to his doggie bed, and lies down.  How does he go from this much energy to just going to sleep?

Other names for a Maltese Shih Tzu are:  Mal-shi, Malti-zu, Malt-Tzu.   This is a hybrid, one of the few designer dogs that did not originate with a Poodle.  It is meant to be a companion dog, happy to be a lap dog.  (Well, maybe not the one in this video.  He can hardly sit still long enough to be in anyone’s lap!)

He is good with kids.  (Remember, always teach a child how to respect and approach dogs, even if the dogs are good with kids.  Children may not know how to read a dog’s signal when he’s had enough.   It’s a courtesy to the dog too.)

Because he doesn’t shed much, a Mal-shi may be appreciated even more by people with allergies.  But just because he doesn’t shed much does not mean that he is hypoallergenic.  If you are allergic to other dogs, and that’s the reason you are thinking about getting a Mal-shi, it’s a good idea to spend some time around one first to make sure you are not allergic to him before bringing him home.   Enjoy watching this Maltese Shih Tzu puppy take on the world.