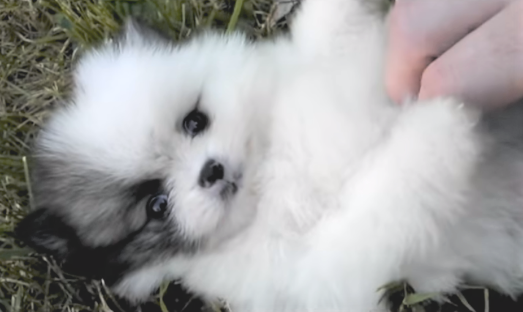 Mickey is actually wolf sable parti Pomeranian puppy.  I understand that it’s quite rare.   In the very last scene of the video, Mickey was 8 weeks old, and he comes in at 1 pound 1 ounce.   I can understand why tiny Poms are better suited in a family with adults that watch where they walk. Even though they get along with children, young children who may play too rough with this fragile dog or accidentally drop them can cause serious injury.

Poms have lots of energy, and enjoy going for walks. They like meeting new people and explore new sights and smells.  They make excellent therapy dogs, bringing smiles to people who are trying to get well.  Pomeranians don’t realize how small they are. They can have a “big dog” attitude and chase after dogs much bigger than they are.  It’s a good idea to train them to stop on command.

Teacup Dog Daily shares that Pomeranians are very popular among royalty and celebrities.  Elvis Presley had two Pomeranians named Edmund and Sweet Pea.  Fran Drescher (from “The Nanny”) has two–Esther and Chester.  Country singer LeAnn Rimes has 3–Joey, Jude, and Raven.  This tiny dog can live a long life–from 12 to 16 years. Longer if it has the right diet, exercise, and health care.  Take them for a walk everyday.  And play with them everyday.  Even though they are certainly the size for apartment and condo living, this breed does bark a lot.  Since they are very intelligent and responsive to training, this is a good first habit to train into them–to stop barking at command.    You can read more about their traits here.

If you enjoy this video, here is another video of Pomeranian BOO becoming pet ambassador of an airline.