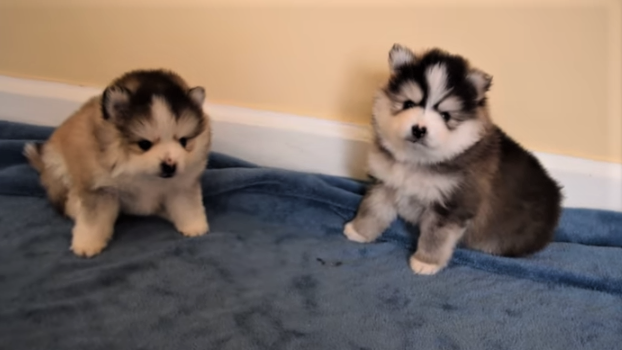 Listen to their sweet little voices in this video.  A couple of them may look shy in the photo above, but they certainly don’t act that way in the video.  Fluffies bouncing around, walking backward…   Pomsky is a cross between a Husky and a Pomeranian.  It’s a relatively new breed, according to Apex Pomskies, so there’s still a lot to be learned about them.   Their looks as well as their personality resemble their parents; some will be more like a Husky, and some, a Pomeranian.

What are the characteristics of a Pomsky?

A good thing about having a Pomsky in a family with children is that they aren’t heavy enough to knock over a toddler like a Husky could.  They have the playfulness and love of a Husky but not their weight.

And since Huskies can wander, be sure to have a secure fence in your yard.   Good news is that while Huskies can jump over the fence, being the escape artists that they are, but Pomskies do not have the height to do so.

Pomskies are very smart and easy to train.   Occasionally, they will howl like a Husky.  They are less independent than Huskies, and are more focused on their human family.

Pomskies are very active.  As long as you have a decent sized yard, they’ll get a good workout.

As for their coats, they’ll be soft and fluffy, and also a silky quality to it, unlike that of Pomeranian.   Nice thing about their coat is that the dead hair will sit in the coat until we brush them.  So shedding is not a problem.  Just brush them regularly.   Do know, however, that one month in the summer, their coat sheds like crazy.  So be prepared to brush them more often during that time.

There are so many kinds of brushes for dogs now that this is no longer a chore; in fact, there are brushes that feel like they are receiving a massage.  They would feel like they’re getting the royal treatment.

Enjoy watching these little ones interact with their human Mom.