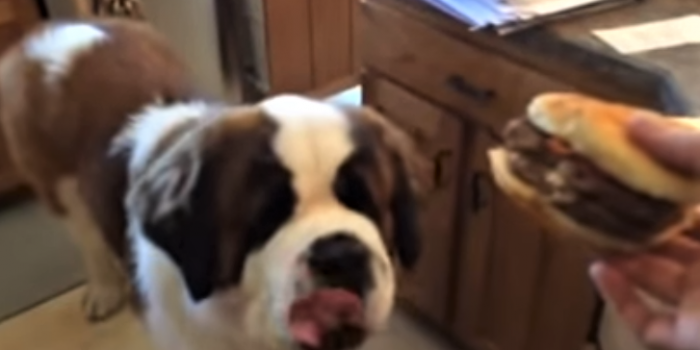 Those with a St. Bernard will understand this video very well.  This St. Bernard just had his first Westminster experience, and his mom is celebrating his success with a double bacon burger.   Rather, a Baconator.  The Saint Bernard’s name is Walter (Wally).  The woman had the double bacon burger cut in half so Walter can taste his special treat a second or two longer.  The burger disappears in seconds.  Literally seconds.  You can count.  This video is in real time.

She’s right, Walter doesn’t taste his food.  Even though it’s important to make sure St. Bernard has enough to eat because of their size, this is a breed that should not be overfed.  The reason is because their temperament is such that they don’t need as much exercise as other breeds.  And without the additional exercise, excess weight could stress their joints, according to Hillspet.  Just look how much weight those legs have to support already.

The Saint Bernard is a large dog; it may take 2 to 3 years to fully reach his adult size.  They are very social, and they don’t like to be left out of family activities. Remember the movie “Beethoven?” Beethoven at the piano, under the breakfast table, on the children’s bed, on the bicycle… If he feels he is left out of some fun, he might sulk.

It’s best to train him as early as possible because he is such a large dog.  Since he likes to please us, training is easy.  It’s fine to have a Saint Bernard around well-behaved children.  This gentle giant is extremely patient and understanding, and they are careful not to injure children.  They watch where they step.  If you’re thinking about getting a St. Bernard, know that this can be a drooler. Remember how Beethoven slobbers all over the father’s shoes?   If that’s something you don’t want to deal with, you might consider getting a different breed.   You can read more about St. Bernard’s here.    Enjoy watching Walter’s very fast enjoyment of a bacon burger.